It’s been a while since I’ve updated my notes here on The War On Sleep, largely because the past months have mostly consisted of waiting and/or incremental steps. I thought I’d write up some of what’s been happening recently.

Note: This is probably not that interesting unless you also have sleep issues (or for some reason like hearing details of my medical experiences).

The story so far:

The link is that poor breathing through your nose means that you’ll sleep breathing through your mouth, which apparently can cause most of the symptoms I report – dry mouth and headaches in the morning and non-restorative sleep being the big ones. So it’s possible that all of my problems with sleep stem from my nose and could have been solved decades ago with an easy surgery.

I’m currently attempting to remain sceptical, and to convince myself to maintain an attitude where I don’t believe this will fix my sleep but that it will be a net good regardless of whether it does. This is mostly to prevent myself from getting excited and believing that this surgery is going to somehow magically fix everything, then being disappointed when all it does is improve my breathing and I still sleep terribly.

Another interesting recent development in the war on sleep is that I’ve recently acquired a HealthyPi. So far I wouldn’t particularly recommend rushing out and buying your own. The ECG doesn’t seem to really work for me (hopefully this will be fixed. According to the linked ticket this may be fixable in software and/or with better placement of electrodes), so right now it’s a pulse oximeter (which I already have. Also it doesn’t do heart beat off the pulse oximeter, only off the ECG, and SPO2 readings are basically not useful for anyone without sleep apnea because your SPO2 doesn’t budge unless something is very wrong) and a thermometer.

Still, the thermometer is useful. I’ve had the parts to put hook up an Arduino to a thermometer for about 6 months now and not gotten around to doing the work, so it’s nice to have that shortcut.

Unfortunately I’m also suspicious of the thermometer. As well as the linked issue I have a nagging suspicion that it’s reporting is slightly (maybe 0.25C at most) low, but it turns out that all the thermometers I have access to are slightly differently calibrated so I’m not sure (this has rather disillusioned me about home thermometer readings being a useful diagnostic tool, though they’re probably fine as long as you’ve taken a healthy reading with the same thermometer recently).

Still, I did an overnight temperature reading based on taping it to my armpit with a plaster and got the following graph: 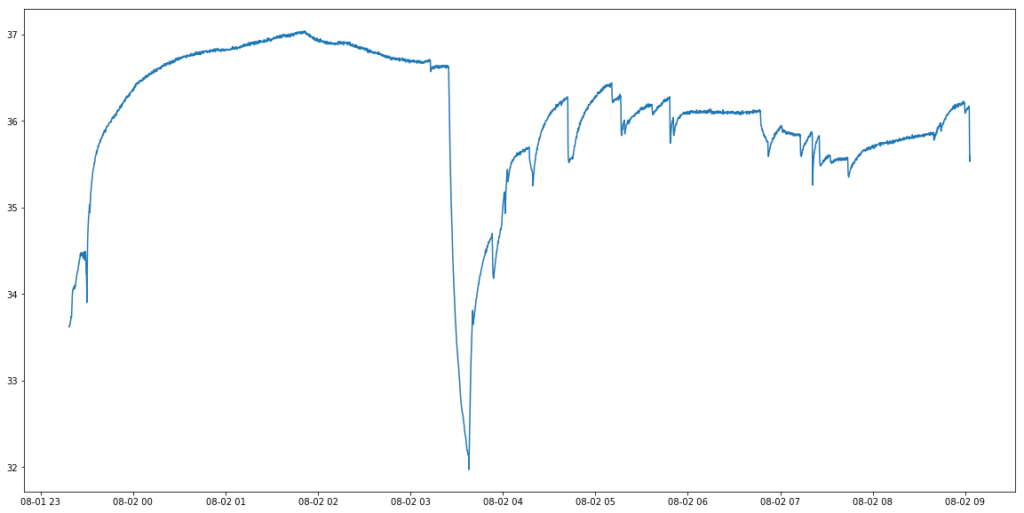 This is interesting because it suggests (subject to concerns about both reliability of both the thermometer and reliability of external readings) that a thing I’ve believed for a while – that my body temperature rises at night when it should be falling – is probably true. The high there is only just over 37, but my body temperature according to other thermometers is typically a bit low (36.5 seems to be normal for me), and the body temperature the thermometer was showing for me after it stabilised in my reading earlier was 36.25, so 37 might actually be quite high.

It’s hard to say for sure though. The sharp drop at around 3:30 followed by the subsequent variability of the temperature is almost certainly not a result in changes of my body temperature (If your body temperature actually drops to 32 degrees then you are suffering from acute hypothermia and require immediate medical attention), but instead a result of the sensor coming partially detached. I’m going to try to get a more accurate reading tonight by, well, doing the obvious thing and sticking the thermometer up my butt (apologies for TMI, but science). Update: This didn’t work well. The HealthyPi thermometer is very poorly shaped for it.

If you have a recent (note: This is from the v3 ones that have just shipped. Older versions appear to use a different protocol) HealthyPi and are interested the code I used to gather the data for the above is based on this code I cobbled together which reads the USB serial port data stream and dumps the raw data as JSON. It’s based on a mix of experimentation and attempting to decipher the processing code for parsing the serial data and the code for writing it. It mostly seems to work (and I’ve checked its results against the GUI) but does very occasionally (I’ve seen it once) find a bad footer. I don’t know what’s up with that. It might be a bug in the healthypi, but it’s probably a bug in my code. Hard to say given the undocumented protocol.

Fortunately the packets are designed such that you can fairly reliably find the beginning of a new one, so it only gets one bad packet and then recovers just fine.

If I can get reliable temperature readings it will be interesting to see before and after results from the surgery. I’d be surprised if body temperature was related to nasal breathing problems, but not extremely surprised as there could be some indirect link.

If you go to a doctor complaining about being tired and sleeping poorly, they will spend a long time trying to convince you that you’re suffering from stress and/or anxiety (my working theory remains that they’re thinking “Well how do you think I feel?!” while doing it).

I’ve become pretty good at loudly repeating “No, these are physical symptoms X, Y and Z” and pushing my way through the system anyway. It’s a skill I recommend acquiring (and if you struggle with it, either personally or because doctors don’t take you seriously due to e.g. gender, note that in the UK at least you can bring someone with you to your GP appointments).

And I still believe the root cause of my sleep problems is physical. Maybe it’s the nose thing, maybe it’s something else, but they’ve presented too reliably regardless of my mental state to not be.

But, well, they’re not wrong about anxiety also causing sleep problems and tiredness, and I do suffer from anxiety, so it’s at least worth trying to deal with.

I tried an SSRI (Citalopram) on my doctor’s recommendation, but I had such a bad reaction to it (including substantially worse sleep!) that I ditched it almost immediately. I should probably consider trying again, but this is my second time on an SSRI and I’ve hated it both times, so I’ve been unable to talk myself into it. Ultimately I think my anxiety and depression are both mild enough that the cost/benefit analysis doesn’t work out.

I’ve also tried theanine for this. It seems to help a bit, but I’m not sure.

A lot of the problem here is I think that my baseline for sleep quality is so bad that it’s very hard to tell the difference. I’m probably going to revisit this question post-surgery.

I have vague intention to try meditating. It’s not something I’ve had a great deal of success at in the past. I’m currently reading The Mind Illuminated, which seems very well put together so far, but I’m currently having two difficulties:

So, um, yeah, there are a couple of things on the critical path here. Another thing to revisit post surgery.

Well, we’ll see. It all depends on what happens with the surgery. I’ll probably have more of an update about that in a month or so.

4 thoughts on “Dispatches from the War on Sleep”