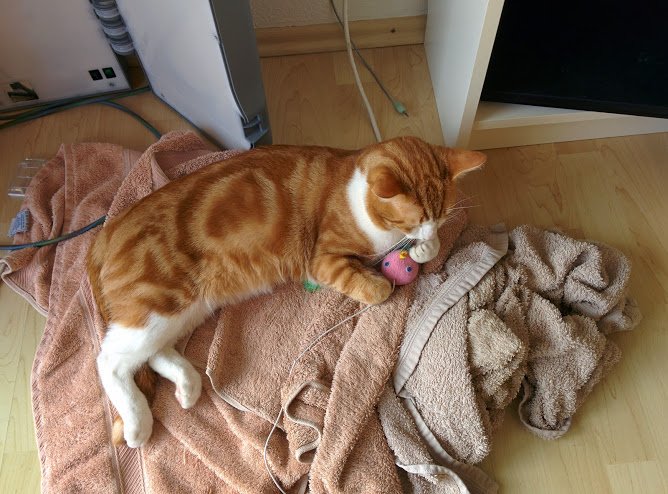 This little monster is called Dexter.

He’s a lovely cat, really. A bit whiny, slightly skittish, but otherwise very nice. He likes skritches and laps and is generally very polite when there isn’t a door he wants to be on the other side of.

Unfortunately he also has a variety of exciting bladder problems. He’s currently on a five pill a day regime in an attempt to sort this out.

We are lucky in that one of the things Dexter does not do is attack people. He might injure you in an attempt to get away when sufficiently panicked (ask me about bath time for kitties), but he never actually attempts to harm you no matter how much he disapproves of your actions.

Nevertheless, we’re engaged in an arms race. It used to be the case that I could just cradle him in my arms, stick a pill in his mouth, and he would swallow.

That is, uh, not the case any more.

Here is our current cat pilling protocol, presented in case it will be useful to others.

There are two people in this protocol. For sake of avoiding ambiguity, I will refer to them as David and Dave. David is sitting, Dave is standing. The role of David is cat control, the role of Dave is pill application.

Something about the squirt of water seems to cause Dexter to instantly swallow. This appears to be a general phenomenon according to the internet.

In order to understand these drastic measures, here is a list of things that don’t work any more or never worked:

I expect the current protocol is only going to work for so long before Dexter figures out how to not swallow when you squirt water into his mouth. Fortunately I expect to have moved out by then.

Edit to add: I had to pill the cat solo tonight. The burrito technique worked… well at least it worked better than trying to handle the cat without the towel. The experience was significantly less pleasant for both human and feline participants, but I didn’t have enough hands to do it any other way.