Note: For obscure and nefarious purposes I’ve decided I should write a little bit more about my life. I’m going to be starting with what entertaining stories I can extract from it, ideally dressed up as some sort of parable or life lesson so you and I can both pretend there’s some point to this.

So as you might have noticed, I can be something of an angry person. I hide it well, but it occasionally comes out in subtle and hard to read ways like telling most of the tech community that they’re utter hypocrites who need to learn to take responsibility for their actions. Things like that.

This is somewhat visible working with me. I’m very often visibly annoyed at things – software that isn’t working right, bits of the codebase that we’ve wanted to fix for ages and have never found the time for, etc.

I’m very rarely angry at colleagues though. Or at least, not to their face. I’ve sent an angry email or two (there was the “How dare you edit my words, you horrible little man! Do you know who I am?” prima donna email I sent once. It was totally justified), but nothing too serious. There have been some animated debates verging on full blown arguments, and I’m sure I’ve occasionally been short with people, but I’ve never actually yelled at a colleague.

Oh. Except that one time.

Picture a scene. My colleague is sitting in his chair, wearing a perfectly respectable suit. I am standing near him. We are arguing. I am illustrating my points by gesticulating with a (thankfully mostly empty) mug of tea.

I am not wearing a suit.

More specifically, I am wearing pyjamas.

Not just pyjamas of course. That would be silly. I also have a dressing gown and slippers on.

There is a towel draped around my neck.

Back to the argument. It is fairly heated. Eventually I shout at him. What do I shout?

“NO”, I declare “This is SCIENCE. YOU do not get to have an OPINION about SCIENCE!”

There are a number of things confusing about this scene which will make more sense with more context.

For example: Why was my colleague wearing a suit? He was a programmer. This was a startup. We don’t wear suits. The very idea is ludicrous.

In order to explain this, I must tell you an important fact: This was a Friday. This particular Friday was also Halloween, but I think that was more an excuse than a reason.

Earlier that week Charles, our CEO, had got it into his head that it would be an amusing team building exercise to invert normal corporate culture. “Many companies”, he said, “have a dress down Friday, in which people come into the office in casual clothes. But this company couldn’t dress down any further without getting arrested, so instead lets have a dress up Friday in which everyone comes in in suits”

“Can’t dress down further?” I thought. “Well that sounds like a challenge”

Which is why on that particular Friday morning I put on my pyjamas and dressing gown, donned some shoes I owned that looked remarkably like slippers (this was before I realised that flat feet and shoes designed to feel like barefoot were a terrible combination), stuck a mug in one dressing gown pocket and a wallet in the other, artfully arranged my towel and set forth for the tube.

I have learned interesting things about how Londoners behave when you do strange things on the tube. I learned it this time and confirmed it when I later carried a giant frog with me on the tube (it was a wedding gift).

They don’t look at you at all. They’re afraid that if they make eye contact the crazy person will come talk to them. So they very scrupulously pretend everything is normal and keep reading their papers.

It might be more curiousity. It might be less fear of awkwardness. Whatever it is, children are entirely happy to ask you what on earth it is you think you’re doing?

Which is why the only remarkable feature of the tube trip to old street was when a child asked his mother “Why is that man wearing pyjamas?” and she replied “I don’t know. Maybe he forgot something?”. I politely explained that I was wearing a costume for halloween. It was mostly true. She looked very relieved.

Eventually I got to Old Street. There I ran into my colleague, Jon. He didn’t look half as scary then as he does now, but he was still suited up and with his shoulder length hair tied back into a (very short) pony tail he was definitely giving off a bit of a Mafia enforcer guide.

He saw me from across the station and thought “Ha ha. There’s some idiot wearing pyjamas. That’s the sort of thing some of the nutters I work with would do…. Wait. Hang on”

So from there we proceeded to work together. Of course now people would look at me. A guy in pyjamas might be a dangerous lunatic. A guy in pyjamas accompanied by a Mafia enforcer is more likely to be performance art. This is East London after all. We definitely got some amused smiles and laughter as we passed.

En route we stopped at Pret a Manger so I could get some breakfast and tea.

The tea was needed to complete my costume. I presented my empty mug and politely asked the girl behind the counter to fill it with tea and could I have a croissant please?

Eventually she stopped laughing. She comped me the tea (Allegedly because I had my own mug, but I’m choosing to believe it was out of respect for the gown). Alas I still had to pay for my croissant, but I guess a gown only gets you so far.

Tea in hand, Jon and I finally proceeded to the office. I put on my best sleepy just-got-out-of-bed face and ambled in through the door, yawning.

There was laughter and a certain amount of respect, but ultimately not all that much surprise. As new people came in we occasionally had conversations to the tune of “Are you wearing pyjamas?” “Yes” “Why?” “Because Charles set a challenge, and I could not in good conscience refuse it” “OK”.

Besides, it was hardly the strangest thing anyone had ever worn to work in that office. 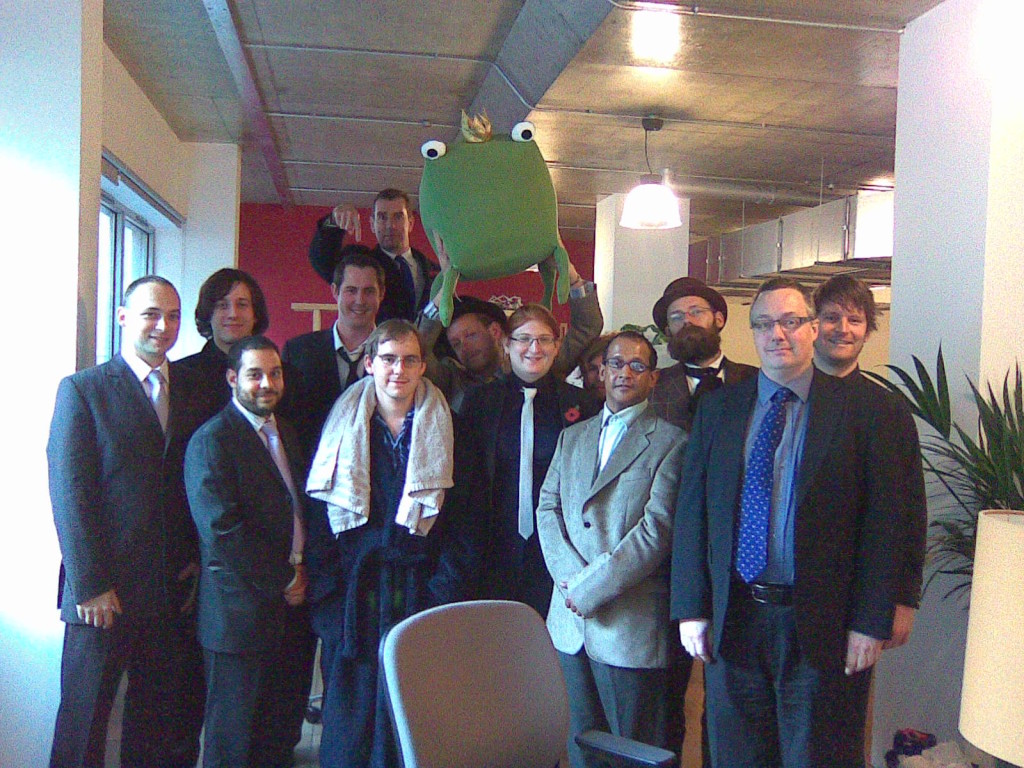 Aww. I was so young and cute! I still had hair and glasses!
Picture taken by my friend, and colleague at the time, Al Davidson

And this, you see, is why when I was shouting at my colleague I had pyjamas and he had a suit. It was normal. Everything makes sense with enough context.

Why was I yelling at a colleague about science?

I have a few hot button topics. Subjects on which my normal insistence on reasoned discourse frays and I find it hard to treat matters of disagreement as reasonable positions to take and instead take them as evidence that the person in question is a terrible human being.

Which is why, when the colleague in question was talking to his neighbour about how global warming was just a big conspiracy by the governments of the world to extort more tax money from hard working individuals like him, I didn’t take it very well.

I was working on something at the time. I’ve no idea what. I had a very researchy job then, so it was probably something to do with network analytics or text processing. I’m going to pretend I was doing something clever, but five chances out of six it was more likely to be tweaking an SQL query or munging large volumes of text through GNU sort.

It doesn’t matter much though, because in the presence of climate change denial going on not 3 meters from me it wasn’t really going to happen. I spent about 5 minutes gritting my teeth and telling myself not to get involved. Then I got involved.

I don’t remember the details of our conversation. I imagine there was a lot of back and forth with me quoting the facts and him weaving conspiracy theories. I do remember what lead up to the punchline though.

Look. You are a programmer. You are not a climatologist. There are a very large number of climatologists, whose job it is to study these things, who actually know what they are talking about and have hard evidence for it who say that you are entirely wrong.

That may be, but my opinion-

NO. This is SCIENCE. YOU do not get to have an OPINION about SCIENCE!

Which is why, on this particular Friday, in the middle of our office, I was in a dressing gown yelling about science at a colleague in a suit. Obvious, really.