Note: This is me pre-registering a Beeminder based productivity experiment. I don’t yet know if it’s going to work, but it feels like a good idea.

You know that thing where you have multiple projects and you use them all to procrastinate on each other? And you know how it results in some projects getting sidelined even though you actually really do want/need to work on them?

I’ve got a lot of that going on right now, and I’m not very happy about it.

Well, I think I’ve figured one out.

The idea is to structure the goal in a way that forces me to keep on the wagon for my active projects. It’s not there to make me “do enough” on them, only to keep the amount of time since I last worked on them roughly bounded. This should be sufficient to end the procrastination loop where I keep putting them off – once I’ve done some work on them I’m more likely to do more.

And the way to achieve this is the productivity deck. 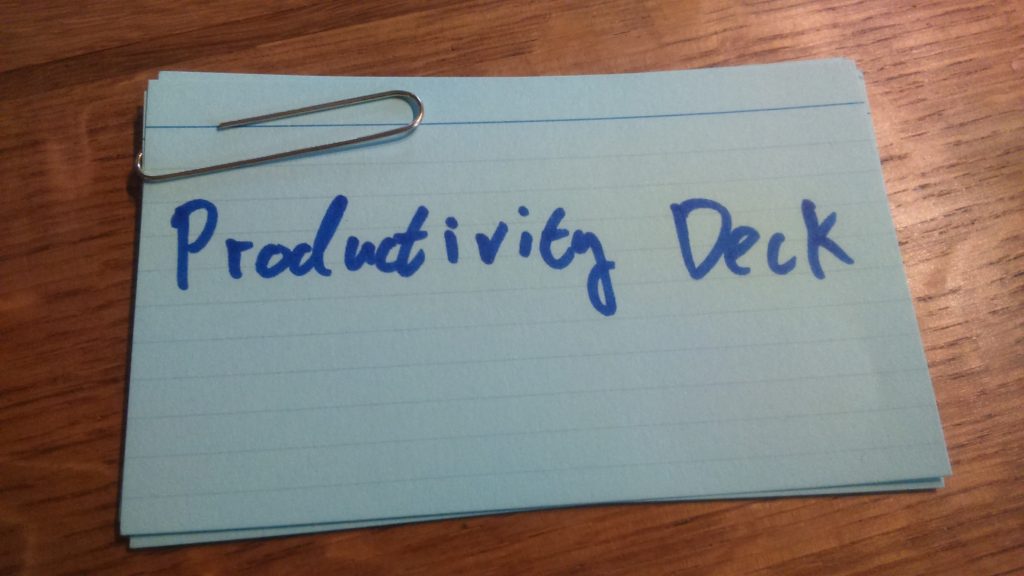 The productivity deck is a deck of index cards each of which has a project name on it. They’re not necessarily disjoint projects – some may overlap, and the same project may even be in the deck multiple times.

The productivity deck is used to select today’s nominated project by randomly shuffling the deck and picking out a card. That is now today’s project. There is then a beeminder goal (using tagtime, so this is doubly random) which is “time spent working on today’s project”.

Attempts to describe this as “gamifying productivity” will be met with swift and harsh retribution.

I have already started this experiment and today’s card was “blogging”. Tagtime pinged while I was writing this, so I get to record 24 minutes of progress for today, yay (update: And pinged again while I was crafting the tweet to post this, which I’m totally counting)! Points for me! In a totally not gamified sense at all!

As I said, this is mostly a pre-registering of this experiment. We’ll see whether it works – it has the characteristic complexity of my trying stupid things with Beeminder that turn out not to work, but I’m still reasonably optimistic and think it’s a good idea. Of course, that is also characteristic of things that end up not working. But hey, it might work and hopefully it’ll be fun finding out whether it does.