A while ago I suggested a bunch of variations on Scrabble. I’ve still yet to play any of them, but I’ve spent a bunch of time this holiday playing a different variation (I actually thought it was one of the ones I’d previously proposed, but looking at them again it isn’t).

The variation works as follows:

The basic intent is that it reduces the element of chance in the game by allowing you to pick your letters more strategically, while still maintaining the basic play of Scrabble.

How does it play? Mostly pretty well, with one caveat which I’ll get to later.

I’ve played 4 games of this this holiday, 3 with my dad (which I won) and 1 with my brother (which I lost, and was also the first one). One of the ones with my dad was super scrabble.

High scoring letters tend not to stay face up for very long – they’re usually drawn within a turn, two at most. The result is that it doesn’t seem to be that much easier to get high scoring letters than it would otherwise have been – there’s still a strong element of chance in whether you get them or not.

Where it makes a real difference is in letting you control the number of vowels in your hand, and in general which low scoring letters you’re carrying. It’s not impossible to still end up with a surplus or surfeit of vowels, but it’s much harder and tends to happen more through bad planning than bad luck.

So in general I’d say all of this is a win – it significantly reduces the ways in which random chance can screw you over and makes for a much more tactical game.

Which, unfortunately, leads us to the caveat.

It turns out that by reducing the element of chance in the game what you end up with is a much harder game. This feels almost like a reductio ad absurbum of Scrabble, in that it makes it impossible to ignore that at its heart Scrabble is a bit of a fundamentally flawed game.

The issue is that good Scrabble play results in Scrabble boards which are really painful to play on. You build small words across small words, you link things up, and you get a board which is dense and hard to expand. 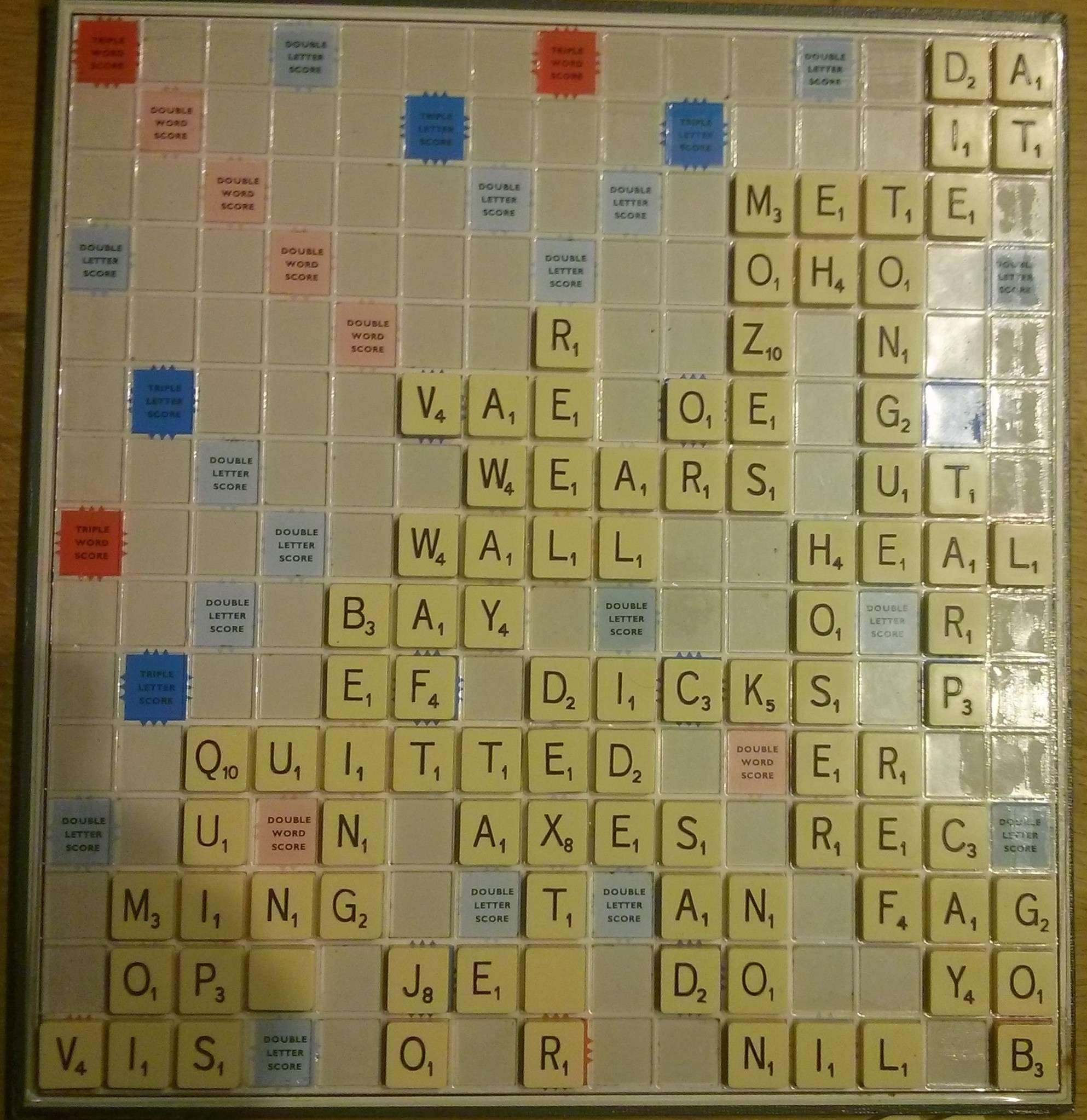 The above is the board Dad and I finished with last night. It’s a little more extreme than most of our games, but not by much.

We both had a few tiles left in our hands and gave up at that point (we realised afterwards that we could probably have continued a few words further, but he couldn’t have closed the 20 point gap so we decided to call it game then). This was pretty much my consistent experience with playing this rules variation: We actually couldn’t finish the board, as we’d already exploited most of the places where you could put finishing tiles.

Another thing that seemed to happen is that the game took a bit longer than normal – I think this is partly because we were unfamiliar with it so were spending more time thinking through the implications, but it was also because we spent more time in the state where we had good letters and a frustrating board so we were sitting there going “But I must be able to do something good with this”.

Super Scrabble helped offset this a bit. I’ve generally found that super Scrabble becomes less congested because you have more room to expand and it lets you move around blockages, and that definitely seemed to be the case here. Also, in Super Scrabble, unlike normal scrabble, bingos are commonplace so in many cases victory is simply decided by how many bingos you get, and being able to choose your low scoring letters helps a lot in reducing the amount of chance in that.

All told, despite these flaws, I think I enjoyed this variant more than classic Scrabble, but I feel like this might be a slight case of Stockholm syndrome: The variation very successfully pointed out the flaws endemic in normal Scrabble play, so if I enjoy normal Scrabble then I must enjoy this variation dammit. On the other hand, a lot of it could simply be that normal Scrabble victory often feels quite arbitrary and this variation made it feel much less so.