I write about a lot of things here. Maths, Programming, Voting Theory, Cooking, Fiction and anything else that amuses me. This post however is about something I’ve never written about before (and will probably never write about again). Shaving.

I really hate shaving. I hate shaving with a passion I normally reserve for homeopaths, inconsiderate pedestrians and J2EE.

Unfortunately I also hate having a beard.

By way of compromise I tend to shave only every 4 or 5 days. After a week I’m verging on beard territory, so that’s really too long. But this only accommodates my hatred of shaving, it doesn’t reduce it.

It’s insulting and it’s expensive and, what’s worse, it gives you a really shitty shave.

But there is a way out of this. A secret that Big Shaving has kept from you.

There is! Behold the safety razor: 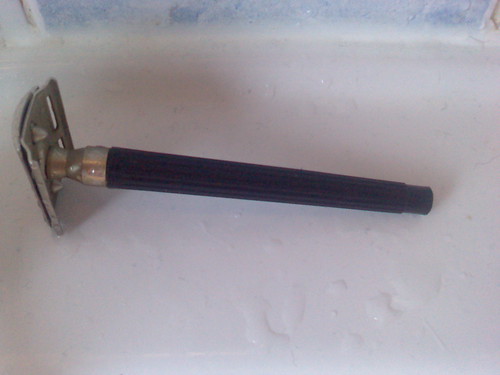 It’s a classic design, one step up from the cutthroat: Most of the quality of shaving, none of the slicing your throat open and sending you to the emergency room. The cheap ones (I use Boots own brand, which I think is the one in the picture above) are typically as good as the expensive ones (because really all it is is a small semi-disposable blade for running across your face. It’s not rocket science: You make it out of decent metal and you make it sharp. That’s it). It gives you a really close shave for a really low price, the blades clean easily and last well, and it probably won’t insult your intelligence when you’re using it (though Gillette do one, so I can’t guarantee it).

It’s not better in every way of course. TANSTAAFL applies, and anyone who tells you otherwise is trying to sell you something (like the idea that you should give them 10x as much money per razor blade). The cost is that you have to be more careful whilst shaving or you’ll get shaving cuts. Not huge gaping wounds, just normal shaving cuts, and they’re completely avoidable once you’ve got the hang of it, but even then shaving is going to be a more methodical process (though not necessarily slower – I find that with a modern razor I have to make more passes in order to get a viable shave).

I wouldn’t go as far as to say to switch to a safety razor has made me not hate shaving, but it’s definitely gone a long way towards it.

3 thoughts on “And now for something completely different”